Happy Monday everyone! I have a much more upbeat update today than the past few. We are finally getting my surge in chest pains under control—at chemo on Monday, my doctor explained that after reviewing the many tests from my ER visit they think my chest pains are all from chemo-induced inflammation. Basically, my gut lining is inflamed from the chemo drugs and can’t heal as long as we keep smacking it with more toxic sludge. It will take probably a month or so following chemo to heal (also the amount of time it will take for my white blood cell counts to go back up, so November was always a sort of in-treatment month anyway) but in the meantime we are treating it with a combination of more drugs and a new diet plan. The team’s dietician met with me during my infusion—unfortunately she arrived after I’d been given Ativan, so my side of the conversation was a little more unfiltered than was ideal. I was very focused on not being allowed to eat pizza and acted as if as if the dietician was standing in my home throwing away my food rather than giving me a list and some helpful guidance that I could follow or not. But she knew I was drugged and I think she thought it was a little funny, which it was. At first I was disappointed about having even more restrictions in my already very restricted life/anything that takes away from the little joys of things like eating pizza, but after about five days on the new regimen (very low fat, very low acid) I was feeling so much better that I got over it pretty quickly. Now I’m thinking of it as an intentional, semi-vegan cleanse for a few months rather than another annoying thing cancer has inflicted on our lives. People do cleanses for fun! I’m not actually one of them and usually think they’re an unhealthy shock to your system that is unsustainable, but it’s fine for now. The difference in the chest inflammation is pretty remarkable (though this isn’t all diet, I am taking a lot of meds); for the last 6 weeks or so, I haven’t been able to walk more than about half a block without stopping to catch my breath, and pretty much any level of physical activity was too much. Yesterday, my sister and I took my longest walk since earlier in July, with just a couple of breaks. It’s possible that the chemo will make things worse again because we can only influence it so much, but every day that feels even a little better is a huge relief. It helps that one of my cousins is on a similar diet and has been delivering us portions of whatever he makes for the week—it has meant at least double the amount of food I can eat being around our house and has also made a major difference in our day-to-day lives. Today it was quiche, kale, and roasted vegetables, which was extra exciting because our oven is broken so we can’t bake or roast anything…because of course! Between my sister and cousin, though, we have tons of food.

Nico also got a much-needed break with back-to-back visits from my in-laws and my sister. If you are one of the people casually following this rather than a close friend, I should clarify that I love my in-laws, because lots of people look a little horrified when I say my in-laws visited for a week since that would be really stressful for most people. It’s not like that don’t worry! They are the best, and they did tons of errands, cooking, laundry, and helped us celebrate Nico’s birthday.

One of the best pieces of advice I’ve gotten is CELEBRATE EVERYTHING (caps included), so we made sure to follow that. His actual birthday was two days post-chemo, so the weekend before, they went to the White Sox game and then we all went to dinner, and asked a chef friend to make the reservation and explain that we’d have some special requests for my health stuff (which he did because he’s also the best). If you have any dietary restrictions in Chicago, I highly highly recommend Girl and the Goat (and I assume the other restaurants in their group). The servers knew every single ingredient in the dishes, and whether they were pasteurized, cooked through, included mold-ripened ingredients, etc, and were quick to make suggestions for how to alter dishes so I could eat them. Usually going out to eat is pretty stressful between the germs of other customers, not being sure what’s in the food, and worrying about cleanliness, but this was all around pretty amazing. On Nico’s actual birthday, they had martinis, fried chicken, and chocolate cake (also my favorite foods, which I abstained from and felt like a SAINT and I hated it but it’s fine) and we watched the Office. I can also recommend this lineup for all birthdays. 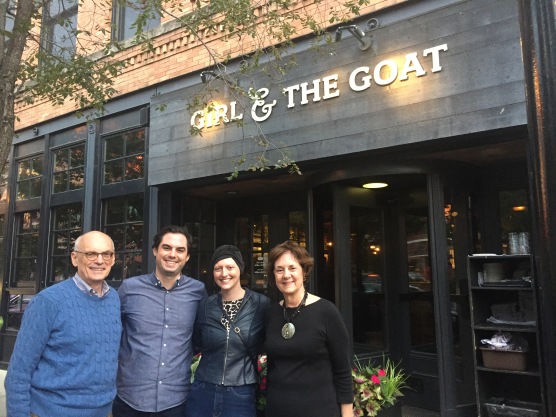 We’ve gotten to do some other fun stuff these past few weeks as well, so here’s a catch-up recap (which excludes visits with several close friends because I never ever remember to take photos, but yay for friend visits!):

Two weeks ago, we finally had a visit with our dog, Fanny. She’s been living an amazing life of luxury in what we call “the fluffy place,” with our friends T&M; they live in a high rise building downtown with carpets (Fan’s favorite thing, her tiny paws slide on our hardwood floors and it’s pathetic), and lots of faux fur pillows and blankets. M has somehow convinced Fanny to be a dog that goes on long walks, and she keeps her bathed and fluffy much better than we did, so her quality of life is higher than any human and we’re so grateful that our friends love her so much! But we also miss her like crazy, and I had started to irrationally worry that she’d forget who I am, so we ordered a bunch of different muzzles to try out on her and prevent her from licking me—the main germ concern since she’s not much of a scratcher—and visited about a day after I left the ER. She looks like Bain from Batman, which is kind of sad and hilarious, but she was delightful and definitely has NOT forgotten who I am. I thought she would be kind of wound up and demanding of attention, but instead she very quiet and very intense with me. She basically ignored Nico, who is often her favorite but who she’s also seen a few times since I started chemo, and just laid silently on me, with her body stretched out on my chest so as much of her as possible was touching me. It was pretty much the most adorable thing ever. Even after I’d been there for a while, I got up to get something in the kitchen and she continued to ignore Nico sitting on the couch, and sat on the edge waiting for me to come back (photo below). For those of you who have heard me complain that she loves Nico more even though I spend more energy caring for her, you’ll know that this was the most gratifying evidence that deep down, I am her favorite. Thanks, Cancer, for providing this high-risk, high-reward experiment on our dog’s love for me. 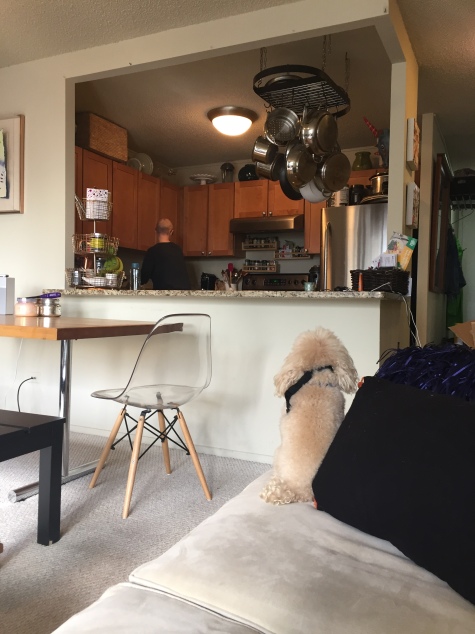 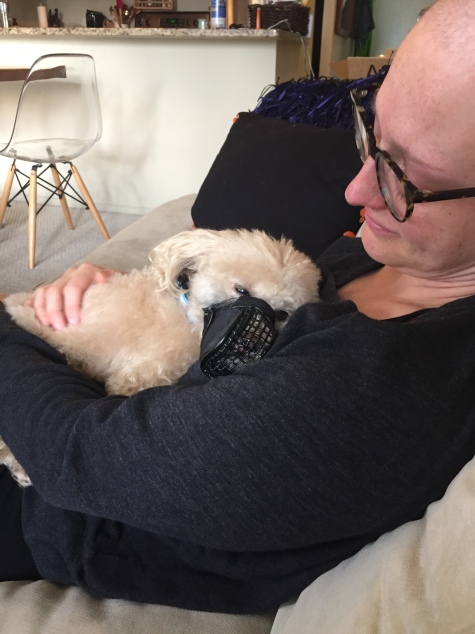 Next, two lovely things from coworkers of Nico’s. First, I got a shoutout on my favorite food blog from the brilliant, funny writer and podcaster Kara Brown. One of Nico’s coworkers mentioned in a meeting that her sister has a pasta blog, and Nico immediately asked if it was Fancy Pasta Bitch, and after some frantic texting from me along the lines of IS HER SISTER KARA BROWN SHE IS AMAZING AND I LOVE HER the message that I’d purchased a pasta maker and found some fun during treatment thanks to her was passed on. A few weeks later, her post included a delightful get well message to Nora in Chicago and I literally read it and said out loud “ahh that’s me!” AND her post was making Marcella Hazan’s pesto, which I’ve made at least four times this summer. I felt like we were true pasta soul twins and it just made my day. On my first solo/not feeling terrible morning today, I made myself my low fat low acid breakfast and caught up on episodes of Keep It! featuring Kara, and I can also tell you that the last few weeks of episodes are great and you should listen. One episode features Jenny Han, the author of To All The Boys I’ve Loved Before, my current favorite rom com and another highly recommended watch on Netflix. So far I’ve watched it three times and it just gets better with every watch.

A few days after my Kara Brown love increased, another one of Nico’s coworkers offered to arrange a visit to the new Glossier pop-up in Chicago before they open for the day and get too crowded for me to go in. This was totally unprompted, she’s just super considerate and came up with the idea and made it happen. And it was so fun! I brought a couple of friends, bought a pink bag of goodies, and took some photos around their beautiful space. It was a delight and I love my husband’s kind coworkers. Another one sends me funny and sweet cards almost every single week and another makes these incredible chocolate peanut butter cookies (that I’m temporarily not allowed to eat but I am deeply in love with). AND two different groups of coworkers got us gift cards for takeout food and groceries. Google, I know you’re reading this and you’re a little scary sometimes but you have some lovely people working for you. 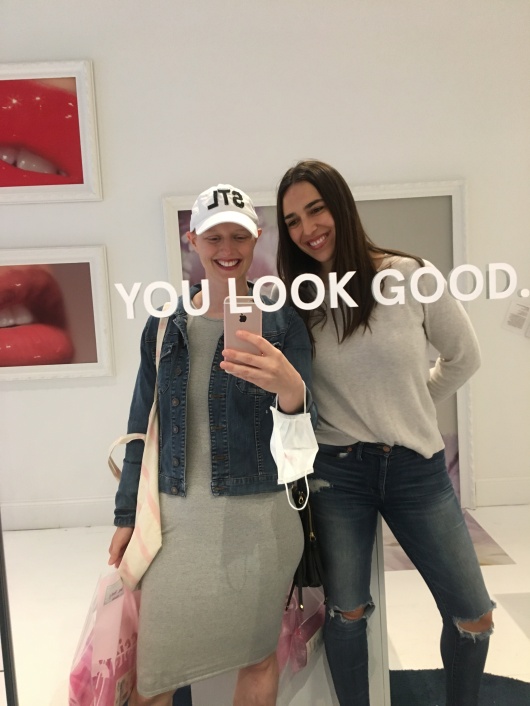